The World’s Your Oyster 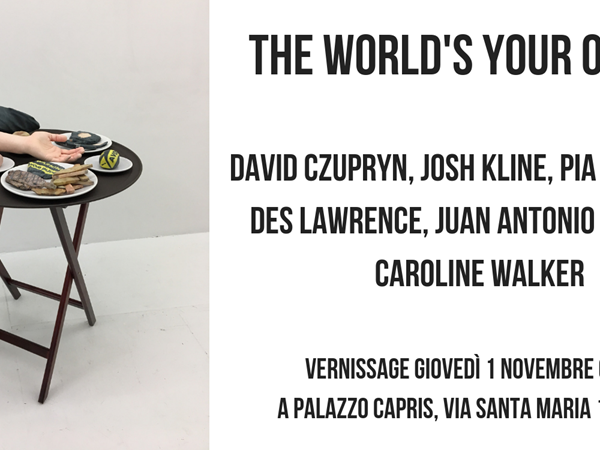 
We are happy to present The World’s Your Oyster, an exhibition curated by ARTUNER coinciding with Artissima 2018, at Palazzo Capris, in the heart of Turin.

This November, ARTUNER will celebrate its 5th year anniversary with a group exhibition featuring works by Juan Antonio Olivares, Josh Kline, Caroline Walker, David Czupryn, Des Lawrence, and Pia Krajewski. We will take this opportunity to look deeper into the zeitgeist of our epoch through contemporary artists’ responses to the age-old genre of portraiture.

The body as representation is constantly questioned as a site of meaning and resistance: in today’s portraits, it is often deconstructed, or cast against a surrealist backdrop, or it melts into oneiric and fundamentally uncanny shapes. While contemporary daily life is unquestionably dominated by myriads of body images – from billboards, to social media, to television – which flicker past leaving indelible and yet invisible traces in our minds, artists push us to look for longer, questioning the symbols of power and submission embedded in our visual vocabulary.

The potency of daily life – with its joys and challenges, but, most of all, its resilience – is often addressed in these works; indeed, the artists have found their subject matter not in ideals, but in “observable, human reality”. As Dushko Petrovich writes for The New York Times: “in a time of chaos, there could be nothing more necessary – more defiant – than simply showing life as it’s being lived.”

Caroline Walker’s oil on canvases, depicting sleek interiors and the women who tend to them, offer more than they let on at first sight. Interested in issues of femininity, gender pay gap, immigration, and leisure, Walker further complicates the genre of voyeuristic female portraiture and peinture engagée by staging with professional models the scenes featured in her works before photographing them and, finally, reinterpreting them on canvas. Indeed, while based on cinematic-like snapshots, Walker’s fluid, yet fleshy, brushstrokes steer away from any photorealist illusion: there is no doubt that, looking at work, the viewer is looking at, and called upon reflecting on – and perhaps challenging – the medium of painting. Caroline Walker (b. 1982) was born in Dunfermline, Scotland; she studied painting at Glasgow School of Art and then at the Royal Academy in London. The artist has been widely exhibiting, nationally and internationally, in galleries and institutions such as the Whitechapel Gallery (London), and SpaceK (Seoul). She currently works and lives in London.

While the genre of portraiture is mostly associated to the celebration of someone’s beauty, or of someone’s achievements during their lifetimes, or even as a romantic keepsake, Des Lawrence specialises in a particular niche: that of notable people’s obituary portraiture. A fascination with icon-like images of late famous – or almost-famous – characters has seemed to increase with the progress of consumerism and celebrity culture – think for instance of Andy Warhol’s Marilyns – but as our existences become more and more rooted in notions of material possession, personality cult and, simultaneously, digital dematerialisation, even the comfort of one’s post-mortem memory has started to disintegrate. Indeed, in Lawrence’s enamel works, at times these take the form of the person’s likeness, other times, an object, a brand, or an architectural structure is asked to stand in for the subject’s bodily features, thus begging the questions: What are we leaving behind once we die?; What will we be remember by, if at all? Des Lawrence (b. 1969) studied at Glasgow School of Art and Goldsmiths College. Selected shows include The London Open at the Whitechapel Gallery, London and REALLY?, Curated by Beth Rudin deWoody at the Wilding Cran Gallery, Los Angeles. Lawrence was awarded the British School in Rome’s Abbey Scholarship in 2005. He lives and works in London.
The fact that our current societal and economical structure often leads to the emotional and personal disintegration of workers is subversively dealt with in Josh Kline’s oeuvre. Through life-like 3D printing he literally fragments the workers bodies and combines it with signifiers or tools of their trade. A preoccupation with income inequality, debt, job loss due to automation, and politics at large in the US and Europe has been pivotal to Kline’s practice since the beginning of his career, often projecting a dystopian future unless something is done to prevent it. 3D scanning and printing is not merely a technique employed by Kline to create these unnerving sculptural installations, it is rather a metaphor for how we are slowly but relentlessly uploading and yielding our data to all kinds of databases, thus creating a miriad immaterial, yet highly controllable, versions of ourselves. Josh Kline (b. 1979) lives and works as an artist and curator in New York. His 2015 installation Freedom was included in the New Museum Triennial Surround Audience and drew widespread attention in the news and arts press. His most recent exhibition Civil War at Modern Art, London, comprised a major new body of work inspired by the recent tensions in American politics.

Much with the same intensity as we are projecting ourselves on thousands of multifaceted literal as well as metaphorical screens, we are also ceaselessly searching for other means of expanding our own existence. As Juan Antonio Olivares explores in his new immersive 5-channel sound installation, we seem to be accompanied in this quest by a divine guiding spirit: love. Evolving out of a 2017 installation work featuring a lone cassis madascariensis shell complaining of its solitude in the universe, how it hasn’t found intelligent life in its search, the Turin work will present a chorus of shells, drawing the viewer into their musings about the ultimate meaning of life. Juan Antonio Olivares (b. 1988) originally from Bayamón (Puerto Rico), studied between USA and Düsseldorf Kunstakademie. He exhibited in several galleries in the USA and Europe, including Jan Mot (Brussels), and the Whitney Museum of American Art (New York), which this summer held his first major institutional solo show titled “Moléculas”. The artist lives and works in New York.

Guidance from a searching, pleasurable principle is one of the forefront concerns of Pia Krajewski’s abstract, and yet remarkably tactile paintings. Straddling the border between figuration and abstraction, Krajewski’s objects assume almost metaphysical connotations, while firmly keeping the focus on the satisfyingly sensorial experience of caressing them with one’s eyes. The signifiers of human and natural physical life – locks of hair, textiles, berries – appear to be here represented as the disembodied protagonists of surrealist still lifes. However, on closer observation one begins to wonder whether they are not the direct objects, while the subject is, in fact, the viewer’s gaze performing the act of looking. Pia Krajewski was born in 1990 in Cologne, Germany. She spent eight years at the Kunstakademie Düsseldorf studying painting under Dietmar Lutz and Andreas Schulze.
Krajewski is currently the Winsor & Newton Artist-in-Residence at the Künstlerhaus Bethanien, Berlin. Selected shows include 72. Internationale Bergische Kunstausstellung at the Kunstmuseum Solingen and a clue in Walther Koenig at Kunsthalle Düsseldorf.

Still life and portraiture are two genres constantly bleeding into one another in the work of David Czupryn. His mastery of painting techniques allows him to create puzzling assemblages of illusionistically depicted materials and objects, which confound the viewer’s expectations of space and depth. Creating his paintings’ subjects out of sheer imagination, Czupryn further challenges our senses, by simultaneously hiding and revealing his humanoid characters: what at first might look like an arbitrary pile of rubble, or an inanimate tubular neon structure, might in fact be ‘alive’, uncannily performing some of the lowest, or highest, instincts of human souls. David Czupryn (b. 1983) was born in Germany and graduated from the Düsseldorf Kunstakademie. In 2016, he was the recipient of the 70th International Bergische Art Prize with a solo show at the Kunstmuseum Solingen in October 2017. In October (2018), Czupryn will inaugurate his first major institutional solo show “He She It” at Kunsthalle Darmstadt (DE). He lives and works in Düsseldorf.