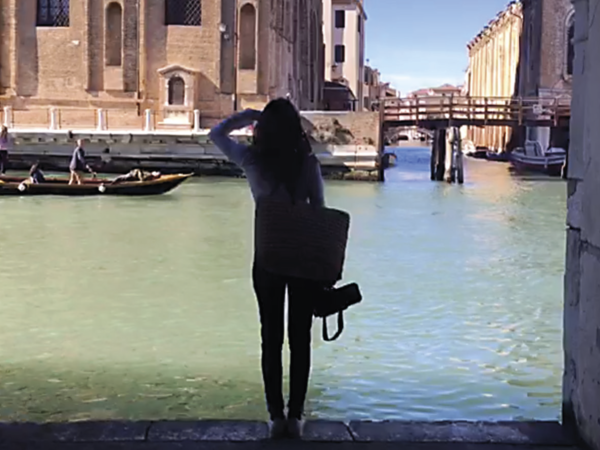 
At the time of the Venice Biennale 2019, ICI International Cultural Institute welcomes the emerging French artist Alice Guittard - winner of the Emerige Award for her first solo show: LOOKING FOR MARCO POLO

Since 2014, Alice Guittard and ICI International Cultural Institute have been researching the myth of Marco Polo. They wanted to create a new experience in the form of an Artist Run Space. Where the artiste her-self is curator and mediator of the space.
The works created especially for this exhibition have as their point of departure the story of Marco Polo, and more precisely his famous work The Devisement of the World, also called The Book of Wonders and all the legends that surround it. The stories of Marco Polo recall the part of fiction that attaches to any narrative traveler, they then ask the question of the boundary between travel and non-travel.

The central piece, the film «Filature à la gondole» offers an investigation that is both a mental introspection mixed with an architectural observation that brings us clues as and when the drift. Shot in 16mm black and white film, it is projected in a loop in the exhibition space. Various clues collected during the Venetian wanderings of Alice Guittard enrich the film.

The artist run space exhibition will be online on artsy.

In 2005, she first undertook a degree in geography and archeology at the Faculty of Nice Sophia-Antipolis before realizing that the maps interest her for their ambulatory aspect and the minerals in their poetic density.
That same year, thanks to a condemned love, she discovered Hero-Limit (1953) of Ghérasim Luca, book that will be the starting point of a work on writing with the will of a post-mortem collaboration with the author, disappeared ten years earlier, since there is no more room for poets in this world. It is ten years after her death that Alice Guittard begins an infinite series of synonymic re-writings of the book Sept Slogans ontophoniques (1963) by Ghérasim Luca.
In 2009, she undertakes research with Tom Bulbex, literary alter-ego born of a mistake of language. It sets out to conquer Mount Nodal, which will give rise to the symbolically authentic non-Euclidean transalpine quest, which grants several techniques such as publishing, sculpture, photography, sound and drawing. It was in 2012 that Alice experienced the performance during a stay in Iceland by rallying the exploration of the language to that of hostile landscapes, preferring tangible results of imaginary solutions and roads all traced their pathways. From this journey, hitchhiked with a sign «Alveg sama», literally «It does not matter», it drifts in the Icelandic hostile landscape and finds its base in Arnarstapi on the Snæfellsnes peninsula, starting point for travel to center of the Earth Jules Verne.
It is through editions, photographs, videos, sculptures and experiments that Alice Guittard derives from stories to stories by revealing in a nutshell the elements that constitute her travels (Mexico, Japan, Iceland, Peru) . With regard to her meticulous research, she cites the concept of serendipity, which the creator of the term, Horace Walpole, defined as the discovery of something by accident and sagacity while one is looking for something else, a definition of art in sum.
Her method of research takes place in two stages, first a risky encounter which then develops an analogy, a mental connection of things that creates bonds, for example, an egg in a nest.
Alice Guittard also analyzes her relationship to time, the viewer and the collective memory. His work questions the notion of exposure by revealing the underbelly of creation and production, playing on the spatio-temporal drift. For her, exhibition rhymes with expedition. Her desire to push the limits of exposure by inventing each time another format, another language is for her a way to bring about surprising analogies in the observer.
In her installations, the visitor then becomes a player in a framed but not limited reality. Starting drifting in space, he becomes narrative of a scenario to come. Moreover, her installations are never the culmination of a project, but simply a stage. The projects extend, tell, share, stop and then resume.
1. Farewell letter from Ghérasim Luca to his companion Micheline Catti (1994)