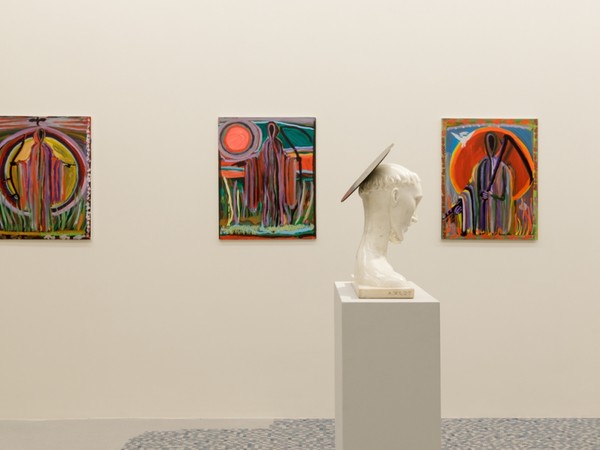 Orari: Tuesday to Saturday 11am - 7pm


Named after the date in which Casa Corbellini-Wassermann began construction, the opening exhibition of this new space, curated by Massimo De Carlo in collaboration with Francesco Bonami, re-emphasises a parallel vision of history, fusing elements of historicism with modernity.

MCMXXXIV presents one perspective of history, with the capital H, and another view encapsulating a more domestic and bourgeois. Still to this date, these two visions of history in Italy constantly overlap and get entwined. 1934 is a drastic year in which the world sees a series of devastating events. In Italy, Mussolini consolidates his power in the final election, whilst Hitler becomes the Führer in Germany. In an ironic turn of events, the two meet for the first time at the inauguration of the Venice Biennale. A small consolation in the rise of such social and political upheaval consequently came in the form of sports; specifically football, where the Italian national team celebrated a 2-1 victory against Czechoslovakia in its first World Cup.

MCMXXXIV does not aspire to the levels of grandeur of condensing a dense and tragic year in history into eight rooms within a gallery, however, the exhibition aims to tell a short story of the duplicity of the time. It does that by combining the works of contemporary artists, punctuated by the presence of sculptures produced around the same time of the construction of Casa Corbellini-Wassermann. While Adolf Wildt emerges as perhaps one of the most well-known artists of that era, artists like Maria Lai, Sirio Tofanari and more were nevertheless a crucial part of a lively conversation between artists and architects of the period.

MCMXXXIV arises, creating a fictional temporal space where the contemporary engages in a dialogue both with the strongly defined architectural features of the place and with the artists and the objects that could potentially have existed in the apartment during it’s time of completion. MCMXXXIV combines harmless subjects like Rudolf Stingel’s garden table and Sirio Tofanari’s bronze squirrel with very loaded imagery, such as Yan Pei-Ming’s grisaille version of 1936 Hubert Lanzinger’s “Der Bannerträger” (The Standard Bearer), depicting a portrait of Adolf Hitler in a Joan of Arc manner wearing armour. The painting was pierced by the bayonet of an American soldier when Berlin was liberated, and this painting has now become part of the War Museum in Washington DC. Ming’s version stresses the power of art to expose and maintain history’s tragedies and its reactions.

Thomas Grünfeld’s hybrid sculptures, Richard Prince’s collages, Maria Lai’s grey brick wall, as well as Felix Gonzalez-Torres’ paper stack or Andra Ursuţa’s painting attempt to show the complexity of the relationship between history and the body of either an animal or of a person. Moving on, the conversation between two sculptures Fausto Mellotti’s Costante Uomo and Luigi Ontani’s Ermestica = SignorBonaventurArtePolo, a famous children comics character of the 1930’s, addresses the continuous tension in Italian art between the attraction toward intellectual purity conflicted with a flirtation with a kind of paleo-pop culture. The tension of this narrative, when positioned in the architecture of Casa Corbellini-Wassermann, reappears in a different way where the rigor of rationalism is confronted by the indulgence of beautiful but baroque decorative materials.