João Louro. I Will Be Your Mirror 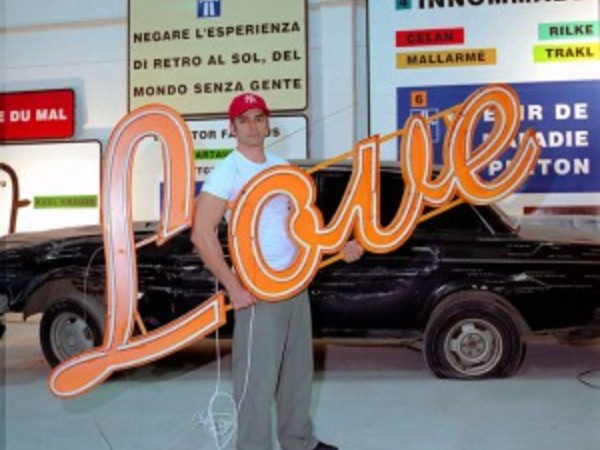 The thrust of the project that João Louro presents in Venice borrows the title of a song from Velvet Underground—”I’ll Be Your Mirror.” Louro sets out an overview of his career, of his artistic and cultural convictions, his concerns and aesthetic and sociological decisions. Through elements taken from Minimalism and Conceptual Art, João Louro is an intensely conceptual artist, one whose intensity is shown in his presentation and interpretation of the world, in his musical phrasing of experience and in his commitment to bringing things to their limit, through a stunning unfolding of calculated tension and control. Louro builds his own world according to the traces that his readings, music and the cinema have left in his path; fusing these traces he builds a sort of autobiography, a personal diary, in which the texts or events are charged with meaning.
The works created specifically for the Portuguese Pavilion, which have been extraordinarily well adapted to the space in each room of the Palazzo Loredan Library, highlight the concern that João Louro has always shown in generating new semantic aspects and raising doubts about norms accepted by our visual culture, as well as in converting the spectator’s role into that of a participant, creating invented places and imagining scenes and inhabiting words that allow us to cultivate our deepest desires and aspirations.
The works Dead Ends are related to the challenge of language. In these he uses road signs as symbols that are automatically recognisable; only afterwards does the spectator reach the second level of reading, which are the contents.
In the series “Blind Images” the spectator is faced with a canvas on which the image has been blanked out, hidden beneath a coating of glossy acrylic and a glass panel that produces the effect of a mirror. At the bottom of the canvas there is a text alluding to or descriptive of the cancelled image, thus provoking different approaches to what is visible or varying perspectives through which one can consider the image.
João Louro’s conceptual work is a questioning about the limits and the expressive capacity of the image, reflecting outside the narrow margin of the work of art itself.
João Louro (b. 1963, lives and works in Lisbon, Portugal)
He studied architecture at the University of Lisbon and painting at the Arco School of Visual Art. João Louro’s body of work encompasses painting, sculpture, photography and video. His work is included in several major collections in Portugal such as Fundação Calouste Gulbenkian (Lisbon), Coleção BES (Lisbon); Coleção António Cachola (Elvas);  Fundação de Serralves (Oporto) and Museu do Caramulo; and abroad such as Fundación ARCO (Madrid), Coleccion Helga de Alvear (Cáceres), Coleccion Purificacion Garcia (Madrid); Margulies Collection at the Warehouse (Miami); Jumex Foundation (Mexico); MACRO Museo d’Arte Contemporanea (Rome). His work is represented in Portugal by Cristina Guerra Contemporary Art (Lisbon) and Fernando Santos Gallery (Oporto), and in USA by Christopher Grimes Gallery (Santa Monica).
María de Corral
Madrid, Spain
Art critic, consultant and independent curator
Presently is Chief Curator of Colección Arte Contemporáneo (Museo Patio Herreriano, Valladolid) and Co-Director Expo Actual. Commissioner of the Spanish Pavilion in the 43rd Venice Biennale. Co-Director 51st Venice Biennale, 2005 Hoffman Family Adjunct Senior Curator, Dallas Museum of Art (2005–08). Director of Telefónica Foundation Collection (2002–06). Director of Contemporary Art Collection, Fundación “la Caixa” (1995–2002). Director of Museo Nacional Centro de Arte Reina Sofía (1990–94). Director of Visual Arts Department of Fundació “la Caixa” (1981–91). She has been Secretary/Treasurer of CIMAM, International Council of Museums of Modern Art and is now a Member of the International Arts Council, Wexner Center for the Arts, (Columbus, Ohio); Member of the Advisory Board Museo Reina Sofia and Patron Member of the Centro Guerrero (Granada) and Fundación Thyssen-Bornemisza, Madrid.