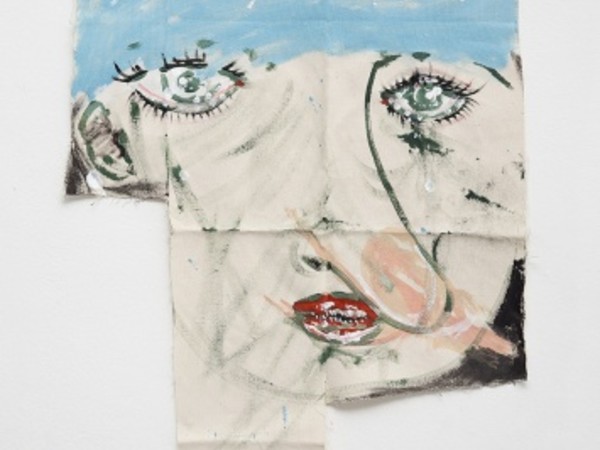 Orari: From Tuesday to Saturday 11am - 7pm


Giò Marconi is very pleased to announce the Russian born -  New York  based artist Dasha Shishkin in her third solo exhibition  with the gallery.

At Giò Marconi Dasha Shishkin presents a new and surprising body of works specifically produced the show.
Dasha Shishkin explores a wide range of materials - mylar, paper, canvas - and techniques – charcoal, acrylic, pastel, oil.
Differently sized and coloured – from black and white to the most vivid tints - the works on show at Giò Marconi display Shishkin’s characteristic universe populated by a strange set of characters.
Most of the works on display are portraits, but they are not pictures of specific people or animals, necessarily.
Several animals are individually portrayed on paper and mylar with various facial expressions. A series of black and white charcoals on papers represent human bodies and add a more narrative component to the show. A couple seems to be about to dissolve, a woman is embracing an enigmatic silhouette, a funny cat is raising from a lascivious nude.
The black and white works are presented together with more elaborated multi-coloured pieces. The various materials used as supports create different kind of effects and line quality.  With that variety, the images still relate to each other stylistically. The images are not connected to each other and can exist all alone.
Shishkin’s figures are engaged in intertwined narratives, imaginings, and deliberate activities that offer the viewer a glimpse into a strange yet purposeful reality. The centrepiece of the show is on the largest drawing composed by nine sheets of mylar.  In there, some portraits – a monkey and a dog for example - peek out within a forest scene.
The artist stated:

“In some drawings I continued the idea of "what if every body part was a separate person", so the knees, breasts, feet have eyes and noses and mouths and, potentially, brains. So the pictures become not a single portrait but a group portrait.
I don't think that these pictures are fantastical, they are more of a "what if this is true now" scenario… I did not want to make an accent on the juxtaposition of something not-cheerful called cheerful but more about the fact that our perception is just that, a perception.  Somebody's gloomy visage can be their resting face and not a sign of some grief”