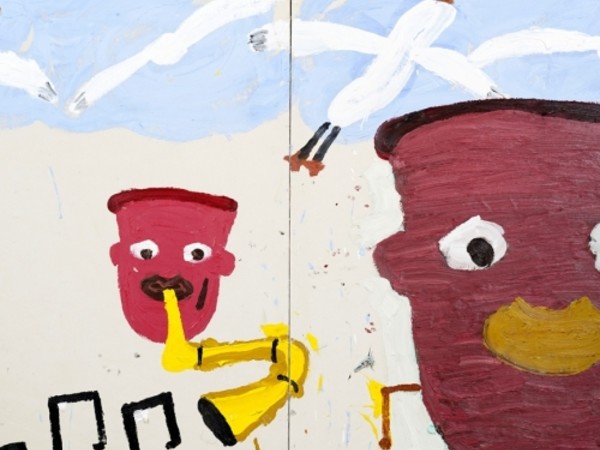 
Brand New Gallery is pleased to present “Yellow Sax” Rose Wylie’s first solo exhibition in Italy.
On view three large-scale paintings: “Black Stork” (2012), as well as two recent works “A Musician From Margate, Seagulls” (2017) and “A Musician From Margate, Shamrock” (2017); that together underscore the artist’s distinctive working process and intuitive approach to image-making.
Wylie creates paintings that on first glance appear aesthetically simplistic, not seeming to align with any recognizable style or movement, but on closer inspection are revealed to be wittily observed and subtly sophisticated mediations on the nature of visual representation itself.
Rose Wylie finds inspiration from a wide range of visual culture: from film to fashion photography, from literature to mythology, from news images to sports, and from individuals she meets in her day-to-day life. The artist paints colorful and exuberant compositions that are uniquely recognizable. Often working from memory, she distils her subjects into succinct observations, using text to give additional emphasis to her recollections.
Rose Wylie’s paintings offer a direct and wry commentary on contemporary culture.