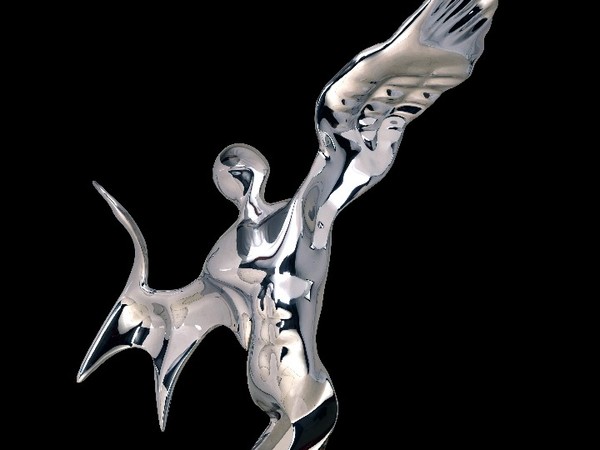 The sculptures, Dilemma of Man and Metamorphosis will be exhibited publicly in Venice’s waterfront park, Giardini Marinaressa from 5 May to 29 November 2019. Akhavanjam’s industrial yet delicate forms draw on philosophy, contemporary socio-political issues and Persian mythology, so that within each work a didactic tale is contained. Both works contain three visible figures, melded seemingly effortlessly into each other.

Dilemma of Man (400 cm x 246 cm) is a portrayal of the struggle between good and evil. A human figure is depicted with a pair of wings. One wing is a magnificent feathered structure - the wing of the angel, while the other takes on a bat like appearance - that of the devil.The work evokes the metaphor of having a devil on one shoulder and an angel on the other, and the conflict of day-to-day choices between good and evil. For Akhavanjam the figure is influential members of society, and those whose decisions have a great impact on humanity.The figure faces this dilemma: to choose what is easy and wrong or to choose what is hard, selfless and good.

Metamorphosis (207 cm x 80 cm) provides a similar comment on society, this time suggesting that humanity must work together to achieve the greater good.Three figures can be deciphered in the sculpture: a bull, an elephant and a deer.This combination is inspired by the Persian mythical figures of the Achaemenid Empire of Iran from around 500 BC. By combining strong, powerful beasts with smaller prey, the artist tells the age old tale of how harmonic coexistence can be achieved if everyone practices tolerance, regardless of differences.

Akhavanjam’s sculptures are made entirely from stainless steel, a material he began to use when working for his father’s manufacturing company for household appliances.While initially using it for more prosaic creations such as sinks and taps, he began to realise its worth for fine art sculpture. Still appearing strong and sturdy, with a weight of up to one ton, the way in which the sculptor coaxes the works means they simultaneously take on a delicate, beautiful and gleaming form.
Akhavanjam says of the meaning of his sculptures:

“Humanity has come a long way in terms of tolerating and accepting one another in order to coexist, but it seems like we still have far to go.This is where art can play a part, by demonstrating examples of this tolerance, and how far it can take us.These public sculptures are my plea to the earth to find the good in everyone, and use it to make the world a better place.”
Janet Rady is a specialist in Contemporary Art from the Middle East and has been working with the artist since 2016. Rady says:
“‘Masoud is a significant figure in the contemporary Iranian market and his participation in projects both inside and outside of Iran are testament to both growing international interest in his work and his renown in the artworld.This is a rare chance to see two new monumental works from the artist on public display in Venice during the Biennale.”

The works in the GAA Foundation’s exhibition PERSONAL STRUCTURES – open borders explore the commonness and difference between Europeans in dialogue with works of non-Europeans.The exhibition is hosted and supported by the European Cultural Centre in two of its prestigious Palazzos in the centre ofVenice – Palazzo Bembo, Palazzo Mora as well as the Giardini Marinaressa.
The sculptor will be celebrated at a private reception during the opening week of theVenice Biennale onThursday 9 May. Smaller scale works will be exhibited during the event.

Born in 1969 in Tehran, Iran, Masoud Akhavanjam was sent to Boarding School in Marburg Germany, at the age of 14. In 1989 Akhavanjam moved to the United States and attended the George Washington University, receiving a degree in Biology in 1995. In 2005 he received an Executive MBA degree from the Kempten University of Applied Science in Germany. From 1997 to 2011 Akhavanjam managed the Design Department the his family’s Iranian manufacturing company for household appliances. During his high school years he took a sculpture class to make ceramic sculptures. He made hundreds in the 80's, some of which were sold. Later with the knowledge he had gained through the manufacturing and the interest he always had in sculpture, he established his own workshop, making his first bronze sculpture in 2011.
In 2013 Akhavanjam had his first solo exhibition at the Etemad Gallery in Tehran, followed by a solo exhibition at the Niavaran Cultural Palace in 2015, and then a solo exhibition at the Shirin Gallery in 2016. In addition, he participated in Abu Dhabi Art in 2016, and CONTEXT Art Miami in 2016 with Shirin Gallery. He has exhibited in group exhibitions in places such as Opera Gallery, Mojdeh Gallery, Mohsen Gallery and Ariana Gallery in Tehran. In 2015 Akhavanjam participated in the Magic of Persia Auction Dubai, and 2016, 2017 and 2019 at the Tehran Auction. His latest exhibition was a solo exhibition at Khak Gallery in Tehran in February 2019. Akhavanjam lives and works between Spain and Iran.