A word for each of us 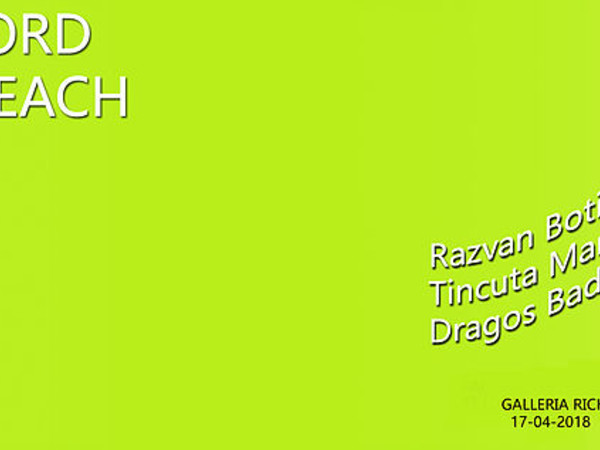 A word for each of us, Galleria Richter Fine Art, Roma


On Tuesday, April 17th, Richter Fine Art gallery is hosting three young painting talents from Transylvania: Dragoş Bădiţă, Răzvan Botiş and Tincuta Marin, in the second collective of this season “A word for each of us”.

In line with the research that the Richter Fine Art gallery carries out around the painting language, the Romanian artists from the Şcoala de la Cluj show their approach towards contemporary painting: fresh, unique, whose works reflect not only the current society, but a singular way to build a discourse on painting.
The three Romanian artists studied at Universitatea de Artă și Design din Cluj-Napoca (UAD), which has turned into an international reference for contemporary art during the last few years: above all as far as painting is concerned, international level artists such as Victor Man (1974), Radu Comșa (1975), Adrian Ghenie (1977), Mircea Cantor (1977), Ciprian Mureşan (1977), Șerban Savu (1978) and Ioana Nemeş (1979) have attended the same Academy.

As Antonello Tolve claims in the text accompanying the exhibition: «With utterly different tastes, which have the same background, though, Cluj-Napoca profile – which is a real well of quality painters – is now made up by new art recruits, by swift eyes watching, digesting, and, între tradiţii şi inovaţii (between traditions and innovations), reinventing. In this way, they enrich images with more and more open contents. With high determination and quality technique, the generation of those who were born between the late Eighties and the early Nineties, possesses a sort of thermometer which image gradation absorbs domestic and foreign experiences, it researches and reflects upon painting, collective memory places and social history, physical and metaphysical spaces, which are often swallowed in the open region of the остранение (Šklovskij), of a narrative process in which the reality is tipped over by an unusual viewpoint».

Dragoș Bădiță, Răzvan Botiş and Tincuța Marin, the triumvirate that gathers in this exhibition that Tommaso Richter dedicates to the fresh faces of the Şcoala de la Cluj, are masters that fully trace the plural scenery of a country in which collective participation senses the importance of the singularity and where what is manual and what is mental inextricably intertwine to create pleasant and engaging visual dizziness.

Dragoş Bădiţă’s works (Horezu, 1987) reflect the momentary nature of the experience and how it is connected to a wider comprehension of the reality, which brings the relation with nature, body, and people on top, with the floating nature of the self, the decadence and dissolution inevitability, and the limited understanding of other individuals’ interior worlds.

Răzvan Botiş (Brașov, 1984) proposes an unvarnished meditative fragment which includes different mood layers: from the capitalism and world corruption darkness to the contemporary man alienation, from the loss of certainties to the social showcasing, from suburbs to the residuals of a freedom subjugated by power.

Finally Tincuta Marin’s works (Galați, 1995) present and include elements from the street art and the abstract expressionism. The artist manipulates reality fragments, decomposes and recomposes them to create magical and dynamical combinations, and completes the collages through basic painting gestures, through line, point, and shape.
Her works are charged with magic and dreamlike images from the shape to the composition, from the metamorphosis of the perceptive filters, to the deformed characters with strange atypical faces.

Răzvan Botiş (Brașov, 1984) lives and works in Cluj. He graduated from Universitatea de Artă și Design din Cluj-Napoca (UAD) and participated in personal and collective exhibits in Berlin, Moscow, Chicago, Venice, Vienna, Bucarest, Timişoara, and Cluj. In 2017 his work was exhibited at Art Encounters, the art biennale of Timişoara.